What do you write?
Ouija & Folk

Tell us a little about yourself… How long you’ve been painting and who you’re down with etc.
I originally got interested in graffiti in 1993-1994, and probably did my first couple tags back then. I’ve been painting seriously since September of 1995 and I’m in the 3A, YL, CPS and Transcend graffiti gangs. I’m originally from Hartford, CT, but moved to Denver in summer of 2009. My painting buddies here in Denver are Jive and the DF guys, and some real cool dudes from RTD and BTR crews.

What brands of paint did you use most frequently in the early years?
When I first started, I didn’t realize there were fancy caps, and euro paint was about five years away from hitting the States so I used a lot of Walmart paint, Krylon and Rust-Oleum, all with stock tips. Some of my favorite colors were these Walmart cans with a purple label, I believe $1.39 a can. They had a color called ‘Cobalt Blue’ that was great. I was also a big fan of the early American Accents colors, especially ‘Autumn Gold’ and ‘Raspberry’. I’d always been a fan of bargain stores, so I’ve emptied a lot of oddball cans.

Are you a can collector?
I started collecting very early in my painting career. One of the first writers I’d met had a handful of paper label Krylons on a shelf and I was fascinated. I’d seen Subway Art and pored over that picture of Lady Pink’s paint stock, more amazed at how much paint she had than vintage brands, and I guess I started hunting for old cans because other writers would always say how much better paint was “back then”. I could just never bring myself to use them and before I knew it, I had a sizable collection going. I was lucky enough to live in a decent area for hunting, so it wasn’t incredibly difficult to find some gems here and there.

Can you still find old paint stock in your area?
Back east pickings got very slim in the past few years, but you could still find a few cans here or there. A couple oddball closeout stores that I used to rely on closed up, and other collectors started to travel more, so Connecticut got picked over pretty well. In recent years I’d mostly find cool colors to use, Rust-Oleum ‘Festival Green’, ‘Mediterranean Teal’, ‘Grey Lilac’, stuff like that, but I didn’t feel like I wasted my time. Since I moved out west, the only thing I’d found on a few short hunts were a handful of 90s Painters Touch colors and some western oddballs. I haven’t been crazy about hunting out here, but it’s not like the East Coast where you moved from one town center to the next in a matter of minutes. I have a hard time getting motivated to drive an hour up into the mountains just to hit 2-3 hardware stores. 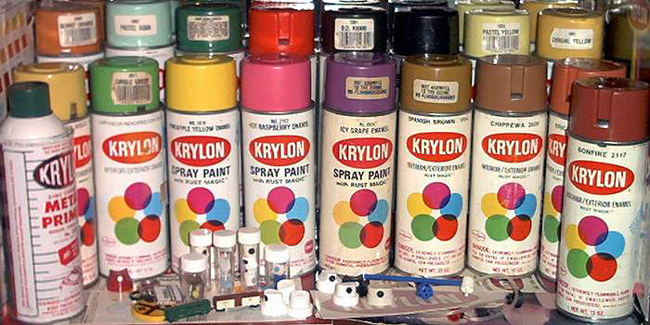 Any good racking stories?
I’ll try to avoid incriminating myself, but I’ve taken a can or two in my day. I once walked into a hardware store and there wasn’t a soul around, so I helped myself to the two cans of Rusto Avocado they had sitting on the shelf. I have to admit that I did try to find someone that worked there so I could look in the back.

Any favorite old paint stores?
Since the place has been gutted by at least a half dozen collectors and I’m sure nothing remains, I’ll have to name ****** ***** & ********* in CT. The place is legendary for the amount of goodies to come out of there. My boy Mike went there one morning and walked out with both a capless Hot Raspberry and a pristine Pineapple Yellow, condoms intact, just looking under pallets and in corners. I’m sure that most of the Illinois Bronze Wet Paint cans out there in collections are from that spot. We had so many. If only we had more money.

Best discontinued paint, and why?
Hmmmm. Krylon ‘Terracotta’ was a good color that covered reasonably well. Krylon ‘Teal Blue’ was fantastic coverage wise. Krylon ‘Mahogany’, ‘Colonial Blue’, ‘Shadow Grey’….all good. I never would have thought I’d miss Krylon ‘Mauve’. Rust-Oleum ‘Charcoal Green’ was one of those sleeper colors no one cared about, but I liked a lot. Rust-Oleum ‘Putty’, ‘Brick’, ‘Grey Lilac’ and ‘Avocado’ filled a lot of my pieces through the years. I had a few cans of this Sapolin ‘Spanish Blue’ paint that was really good, but I’d never seen anywhere outside the Railroad Salvage store I got it at. I saw the flicks after a few years, and it completely faded off. The MTN Hardcore and Krylon I did linework with was still riding strong. Go figure.

Ever found some racked caps work good with certain paints?
Oh man, I still use a lot of racked caps. The only difference is that now I come in with a handful of stock tips and trade them out, rather than leave them empty and piss everyone off. I started doing that after I bought a can of graffiti remover once and it had no cap. I can’t imagine what a civilian consumer must feel like, because I was annoyed and had a baggie full of caps upstairs. There’s a great cap for Rust-Oleum that comes on the Elmer’s Spray Glue. It’s similar in appearance to the old comfort caps that Rusto’ used to use, only it’s white and sprays a lot like a NY fat. The graffiti remover fat caps were great, and clear coat NY thins are still the cleanest caps out there in my opinion. Everyone talks about the old Liquitex thins, but I like these better. The Liquitex caps sprayed too small and dusty. 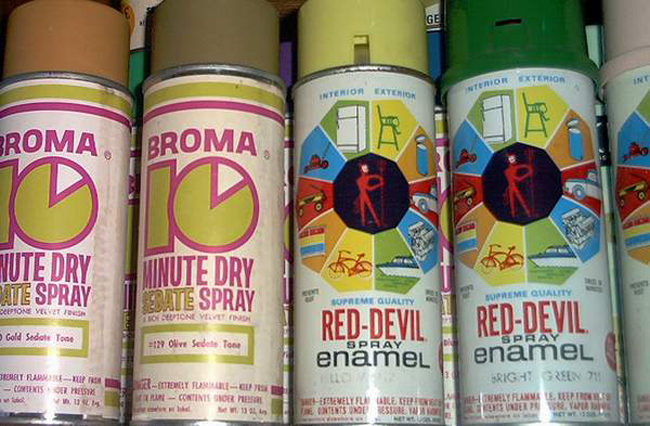 Worst paint ever award goes to?
A couple weeks ago my man Jive showed up to the wall with a can of Krylon ‘Ivy Leaf’. Not only was it fan spray, but I think it might have beat ‘Sun Yellow’ for the weakest coverage ever. Absolutely terrible. It may as well have been one of those tinted transparent euro colors, except those don’t drip everywhere. As much as I miss it, the Walmart Silver was pretty bad. Halfway through the can it got so low pressure that it sputtered and wheezed like Tony Soprano in season six, and lasted about a week on steel.

What are some of your best painting experiences?
I’ve had a lot of great painting experiences over the years, too many to recall a specific time or place off the top of my head. In terms of supplies, a couple summers ago every Rust-Oleum can my friends and I used would magically take a NY Fat without leaking, so it was game on for fatcap pieces. A few months later it was back to normal. There was also a brief period of time that Krylon ‘Gloss Black’ was nice and solid, so that was great for outlining. I always thought it was strange how every couple years the Krylon black that was best would change from Glossy, Semi-Flat to Ultra-Flat. I’m personally a fan of Glossy Black’s look the most. It’s easily the most intense, darkest black. Ultra-Flat looks like dark grey to me. I used to love it when I started, then slowly got sick of it. The new shit cracks all over the place besides the fan spray… Useless.

How do you feel about the brands of Euro paint and their impact on the scene?
I’m a big fan of European paint in general. The first time I used a can of Belton RAL, it felt like paint for dummies. So soft, smooth and consistent. I absolutely love Molotow, and I hate Montana Gold. I’m also not a big fan of MTN Hardcore, but their new 94 line is good. It’s not European, but Ironlak seems like a good, affordable product now that Krylon has gone to shit. They seem to be very invested in graffiti culture and furthering the artform. I know a lot of people hate on Euro paint, but for someone who likes to paint a lot and do it cleanly, I compare it to fine art products or professional quality sports equipment. You’re going to play a better round of golf with quality clubs. There’s so much less hassle and headache. I still use Rusto’ brands for fills, mainly, but I enjoy having a couple cans of euro paint to do linework with. I rarely have to touch anything up, and the colors are always so much more vibrant. A piece that used to take me 4-5 hours now takes me 3. I always say that I’ve never heard of Krylon or Rust-Oleum sponsoring an event to showcase graffiti, so why should I be loyal to them? Ironlak sent me a pallet of their paint just for mailing in some caps and winning their raffle, and the owner of the company has always answered my emails. I think it’s just an evolution of graffiti. I’d rather get on the train and stay relevant. I’m already starting to see the collectability of European brands. MTN Hardcore has changed their labeling in small ways at least 3-4 times since I first saw it. 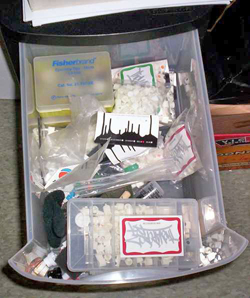 If you could choose a few cans to have on your shelf, what would they be?
For some reason I’ve always been really psyched on the old Nybco Wet Look cans. They’re so wacky and strange. I have three, but I’d love to complete the set.

Any other comments?
Thanks for offering me this interview.