What do you write?
Soe1 – Box Car Junkiez

Tell us a little about yourself… How long you’ve been painting and who you’re down with etc.
I started painting walls in 1982. Left for the military in 1984, continued to paint out in San Diego, gave up graff for DJing, and didn’t paint again until after I got out of the military in 1988. I was mainly bombing, and didn’t really fall in love with graffiti until 1995. An old enemy of mine got me back into it, we became friends, and it just took off from there. We both painted our first freight together in 1995 and we’ve both been steadily active since then. Over the years I’ve been down with several crews, TWA, TNP, TSB, KSW, NSF, but over the years things change, people change, and I only push my crew which is BCJ, Box Car Junkiez.

So what brands of paint did you use most frequently in the early years?
It was always Krylon man, with some Rusto mixed in.

Are you a can collector?
I was, it was almost a daily mission looking for cans. In my line of work, I had two things going for me, lots of traveling, and hardware stores. I am a Carpenter by trade, so I was always traveling to jobs, and stopping at hardware stores for supplies, so I’d always check the paint stock, ask the employees about older paint they might have stored, etc…

Can you still find old paint stock in your area?
Yeah, I have a few spots that still have some oldies laying around, nothing rare, but still some goodies.

Any good racking stories?
No not really, but I’ve heard several from other writers over the years.

Any favorite old paint stores?
Ah man, I have one for sure. There is this old auto parts store I went into once to check for paint. They had 2 entire racks filled with old krylons. I asked if they had anything stored in the back, and the owner took me back there, and to my surprise he had cases of old krylon that was discontinued. He said I could have it if I wanted but I was like, ‘’I don’t have enough money for all of this’’, he then replied, ‘’No it’s not for sale, you can have it’’, my jaw dropped! Some of the colors were, Od Khaki, baby blue, smoke gray, hot pink, jungle green, and mandarin orange.

Best discontinued paint, and why?
Hmmm, there’s a lot, but my all time favorites are Krylon Baby Blue, Hot Raspberry, and Coral!

Any good racked cap/can combos?
No, but I used to steal the caps off the Graffiti Remover cans!

What were some of your best painting experiences?
I think the best time I can remember is when I went up in Montreal, CA; with Pen1, Xide, and Sorc. The freights were easy, and the writers in Montreal were very down to earth and cool. It was a fun time, Pen1 made it quite memorable. I miss Montreal.

How do you feel about the brands of Euro paint and their impact on the scene?
Too pricey, although I have used it. I think it’s good stuff, and good quality. It definitely broadens the scale. Every color imaginable, I think it lets writers really push their creativity, and produce the best possible work they can do. I mean with all those colors, anything is possible, and there’s no limit to creativity.

If you could choose a few cans to have on your shelf, what would they be?
In a quick reply, Krylon Pineapple Yellow, Hot Raspberry & Aqua. Rust-Oleum Cascade Green.

Any other comments?
Not really, just the same thing I’ve been saying for years, learn your history, respect the pioneers, the game and the rules. Long live the Railroad!!
SOE 1 – Box Car Junkiez. 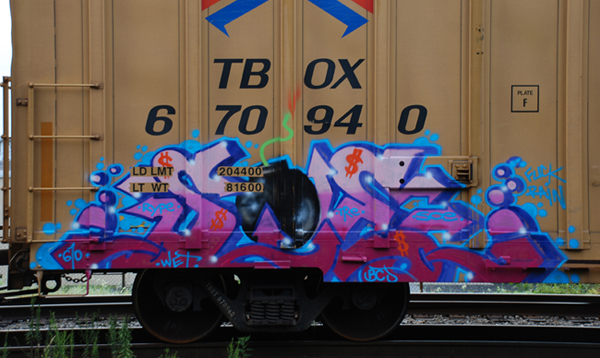