What do you write?
Sen One – The original Sen out of New York City! 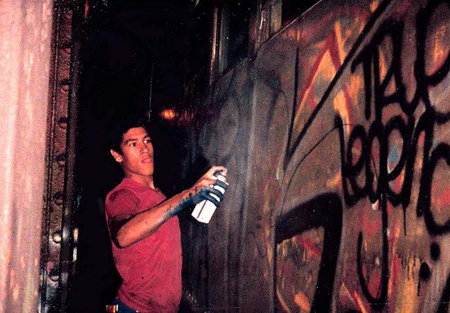 Tell us a little about yourself… How long you’ve been painting and who you’re down with etc.
My full name is George ‘Sen One’ Morillo, I was born and raised on the Upper West Side of Manhattan in New York City. I’ve been a Graffiti artist since the early 1980’s, the golden era of Hip-Hop culture. I first started writing graffiti in my neighborhood in 1980, and started painting subway trains by 1982. That same year I joined ‘Masters Of Style’, MOS, ‘Incredible Bombing Masters’, IBM and a few years later ‘First Class, FC. Incredible Bombing Masters as a crew were pioneers of their own style of Graffiti. The crew first started bombing on subway trains and school yard handball courts. Incredible Bombing Masters is a legendary crew that was created by ‘Doze’ Green, a member of the famous Rock Steady Crew. In 1982 the crew that Doze created was passed down to ‘Poke’ a close mentor of mine and a mutual friend of both. Sen One along with Epic both joined Poke and became one of the first members of the crew under Poke and one of the most revered Graffiti crews in Hip Hop History.

In 1981 I was attending Joan of Arc, JHS, and that’s where it all began. The New York City school system was failing and falling apart and this gave the students the opportunity to do what we wanted. Students began to teach and learn from each other rather than their teachers. This young group of kids learned designs, styles, and letter techniques that where being passed down from older graffiti masters before them. As a main member of IBM, I came across many talented and skilled young urban artists like Doze, and also cats like, Frosty Freeze (RIP), Deno (RIP), Rel One, Flaquito 149, Ken-Swift, Kippie Dee (RIP), Skep, Lucan, Kazar (RIP), Zor One, Chap, Tel, Stile, Rook (RIP), West, Risk, Stash (aka) Kev One, Fabel, Roz One, Nel (RIP), Pel (RIP), Sha-Man, Phear, Lil-Man, Zear, Totem, Jon One 156, Sia (Zoo York), Zame, Rad, Jigs, Kose, Dash, A-1, Juice, Camp, and so many more.

Around this time Hip Hop was in it’s golden-era, and the world was getting it’s first taste of this fresh new sub-culture and Africa Bambaataa, (Zulu Nation), dropped the classic “Planet Rock”, in which a young Sen One can be seen in the video for that iconic song!

The fashion world recently got a taste of my artwork when it appeared all over Rachel Roy’s line called ‘Rachel Roy – Something Undiscovered’. Not only was my artwork featured on the fabric, shoes, and bags, but I was also commissioned to do the graffiti art on props as well as being included in the fall 2009 photo shoot. On September 1, 2009, my artwork was featured in all six of Macy’s main windows on 34th Street, NYC. 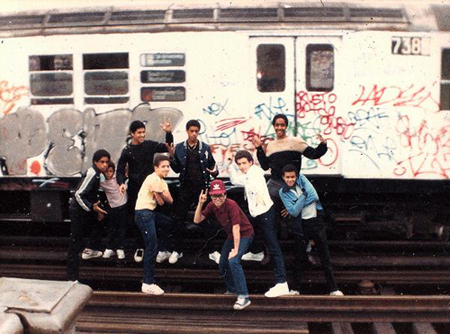 What brands of paint did you use most frequently in the early years?
Krylon, Rust-Oleum & Red Devil, but mostly Krylon.

Are you a can collector?
Not really, but I do got a couple of joint’s that I keep put away!

Can you still find old paint stock in your area?
No, not anymore. Gentrification has killed the moms & pop stores. It has also killed true Hip Hop as well. 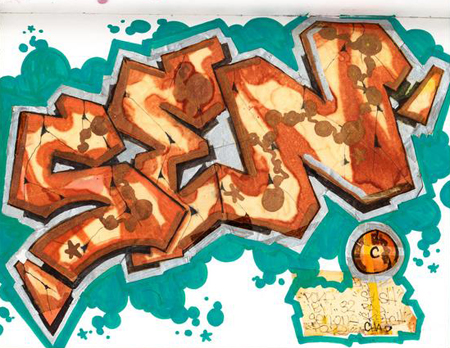 Any good racking stories?
Too many.. One time.. around 1983 we all went up to an old moms & pop spot in Westchester up in the Bronx. Me, Poke, Epic, Pel (RIP), Stile, Rel, and a few other kids… We racked up mad paint and got chased out, but we got away. When we got back around the way and we looked at the paint the cans were mad old! But we scored, because it was colors that were discontinued and we was the shit that winter because we had colors that other older writers didn’t even know had ever been made. We killed the number 1, Broadway line with fresh burners.

‘Worst paint ever’ award goes to?
Rust-Oleum… Too watery!

What are some of your best painting experiences?
Back in the 80’s, when it was about painting trains, being OUTLAWS and fighting the system. The years when we took over 145th st lay-ups and we killed the number 1 line! IBM/FC. Just being in the tunnels with cats like Poke, Epic, Risk and West holding each other down. There’s too many stories, I have trouble picking one.

How do you feel about the brands of Euro paint and their impact on the scene?
They’re cool I guess. It makes everything easier for today’s graffiti artist to do their thing. I come from not having anything made for us to use and graffiti was the enemy of the state. We use to make our own shit, and used what ever we had. So for me, I’m not really impressed. A major part of this culture is keeping it’s grassroots techniques alive and having some outsider making our tools for us is not the way to go for me. I think all so-called writers should know how to make their own mops, fat-caps, etc – The tools of the trade!

Any other comments?
You can reach out to Sen One at:
www.myspace.com/sen_one
www.twitter.com/sen_one