What do you write?
Top Gun – I live in North of France. I’m still writing so… I better be careful!

Tell us a little about yourself… How long you’ve been painting and who you’re down with etc.
I’ve first started looking at tags around 1987-88, there was a big garage door in front of my grand ma’s house, with plenty of scriptures in different colors… It was amazing, I was 6-7 years old and one guy really bombed the neighborood I lived in. I thought “who’s this guy, ‘Enzo’, I see him everywhere?…”

One day, my older brother was pimpin’ his motorcycle, and I found some cans in our garage, Krylon and Julien. One afternoon I took them and sprayed a Peace & Love sign, a hand doin’ a “Fuck”, and a VIP, ’cause I saw one guy sprayed this in a video clip on MTV… Ice ice baby!

I started painting around 96-97 and I’ve never stopped, even if I had my ups and downs.

I’m down with the old-school of Lille, who told me knowledge, Sleek, Shug, Edge, and all the guys from the 80s. I’m not really down with the middle-school neither the new one. I’m a little bit solitary… except when my crew run fast, between 2004 and 2007, when I gave everything to it, I haven’t even done my own name in those years, it was all about the crew, 4 big silver letters everywhere. 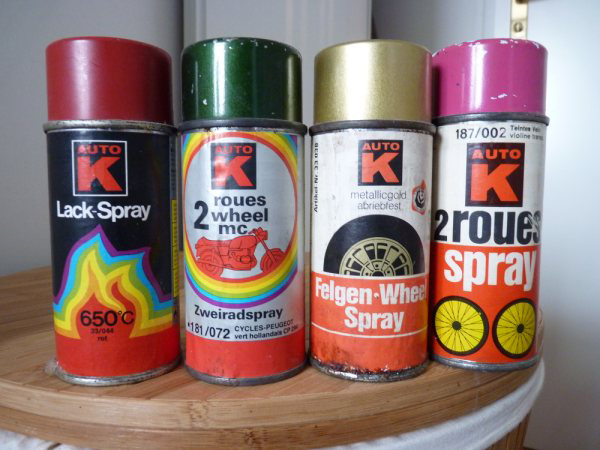 What brands of paint did you use most frequently in the early years?
I started with Sparvar, but you couldn’t put a fat cap on ’em, and as I was doing mostly throw-ups, it was so slow to paint with, even if it was high quality paint. Then Montanas invaded the market, I’ve paint a lot with them, but I quickly left them. They are so fuckin’ leaking, they spray everything but the wall, you come back home with all your clothes silver painted, your face, and they give heavyyyyyyyyyyyyyy headaches.

After two years destroyin all my pants and jackets, and spending too much money on the MTN’s, I started stealing cans. Everywhere, all day every day! I always have been stealing stuff, and as my hungryness for paint grew it became an evidence to steal paint.

Are you a can collector?
I was stealing cans everyday, from 10am to 19pm, from every little stores to big hardware chains. I took every cans I could put a hand on. So I started finding some weird cans, with colors I’ve never seen before, and as I have so much paint I put the cool ones apart of my stock, and month after month it was getting bigger.

I’ve visited every stores in about 250 kms, plus Paris, plus a big part of Belgium. And when I went to Seville, Barcelona, etc. I always found the time to dig a little bit, even if my girlfriend went mad about it… 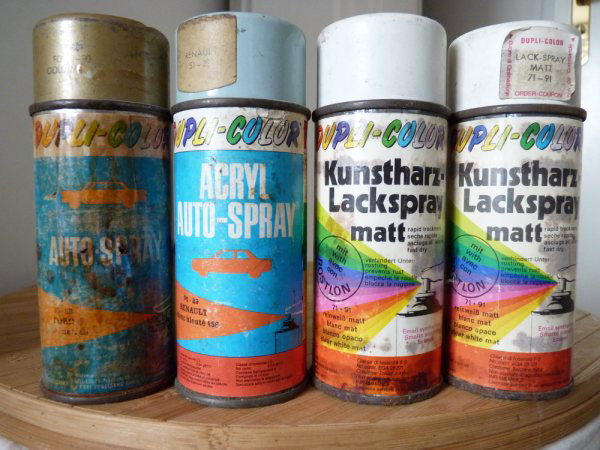 Can you still find old paint stock in your area?
I’ve cleaned up almost every good spots, and writers often tell me stories like “oh man I’ve been to a store so easy to rack… but they didn’t have anything left!” And me answering “Yeaaaah man great spot I’ve been there 4 years ago!”

We had the french importator of Krylon near our city, and I cleaned it 3 years ago… they hadn’t a lot left, ’cause they stopped Krylon 12 years ago, but I found some cool colors like ‘Hot Pink’, and a big stock of 91 UFB, ‘Mauve’, ‘Violette’, ‘Pastel Yellow’, and some other colors. 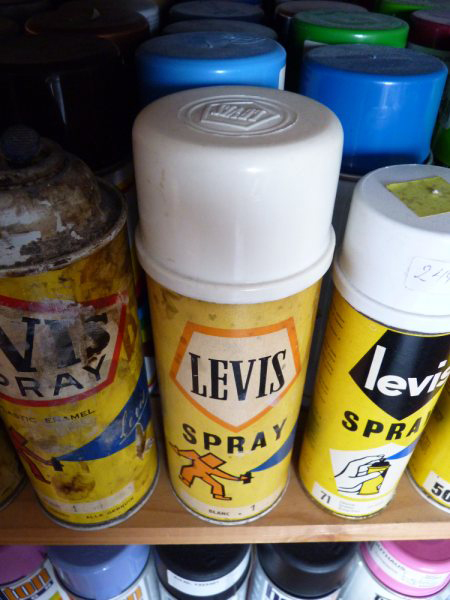 Any good racking stories?
At a time Belgium shops were so easy to rack, like 4 or 5 years ago, that some days we had to come back after just a few shops cause we didn’t had any room left in the car! And we were two! But the good time is over, and Dupli-Color starts to react.

The cool days were also when I went to each hardware shop like 4 or 5 times in a row, cleaning their silver and high-heat blacks stocks. At the end of the day, I managed to get like 200 hundred or 300 hundred cans, just silver and blacks. Like 5 days a week, for like six months. My crewmates didn’t have to do anything, I gave them so many cans. That’s why we got up that much in a little bit of time. We were heavy loaded!

Oh yeah I have a great story: One summer day I was eating with my girlfriend and some friends in a restaurant, in a cool spot near the sea, a very well known seaside I came to since I was born… We only were there for some hours. It has been 4 or 5 years I didn’t come, and I remember one little hardware store from my childhood. So I told my girlfriend, in the middle of the meal, “I’m coming I just go looking for something…”

I speeded up to the store, which was really near all the restaurants, but found it closed. I could see the cans, my head stuck to the window. “Oh shit”, I rang the bell, knock on the door, shouted at the house-windows up, but nothing… “Man I gotta get in”. I got behind the store, climbed the wall, and I was on the first floor. I pushed the toilet window, and it opened so easily! I got in, but it was so fuckin’ dark, I couldn’t even see my feet! I was like a blind man, one step after the other, trying to find my way downstairs, but I couldn’t find it.

I came back outside and jumped in the yard. All remains left was to break the window, so I took a big fire extinguisher and “bllllllllllllllammmmmmmmm”, window broken! Even if all the restaurants must have heard me I got in. I quickly got my hand on a bucket and filled it with all the cans I could. I hide it behind some bushes and go back to the restaurant, to finish my meal. My girlfriend asked me “Was it open?”, I said “huuuum… no”. “So what have you done all this time?!?”… She quickly understood I broke in, and she didn’t spoke to me for the rest of the day! 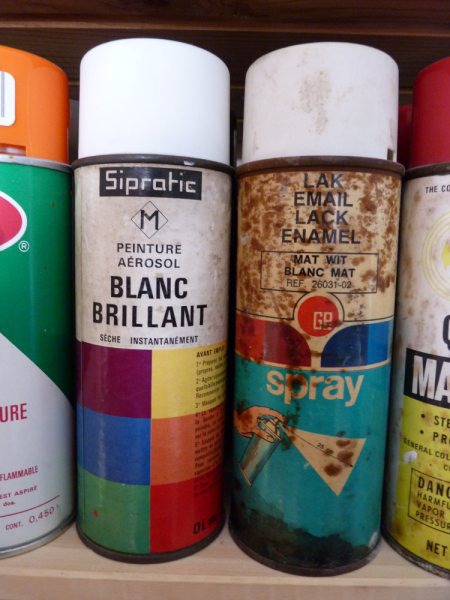 Any favorite old paint stores?
Oh yeah I have my old friend in a little city, who have this little paint shop since 1954. He was a war prisonner, and always have a funny story about how he nagged the Germans guards! I’ve found the biggest part of my Novemail set there.

Best discontinued paint, and why?
It’s so hard to tell, ’cause I really love a lot of brands, and I still use them…

I would say Auto-K, and all the brands they made during the 70s and 80s. (Altona, Belton, Multona.) Paint was incredibly thick, and the line was speed, violent, and paint never faded. But I would also say Marabu, and the 70s Dupli-Colors’ factory odd brands ’cause it was really thick and fast.

Ever found some racked caps work good with certain paints?
Oh yeah, I found a cap one day on a anti-mosquito can, which was so speed, and got so much flow. It appears to me years after that it was the same cap on the older Marabus, with the horizontal logo.

Worst paint ever award goes to?
All the Italian paint, it’s so watery, you can’t make anything out of them, even with three coats and a good primer.

What are some of your best painting experiences?
Painting 15 pieces, big silver letters, like 5 cans fill-ins, and seeing all my friends falling asleep one after the other like “Oh come on man we leave”, and I was like “No come on guys there’s some space left on these walls, and we have 20 silvers left! Keep painting, I fill-in!” Every night it was like this, I have too much silver to use…

How do you feel about the brands of Euro paint and their impact on the scene?
I really don’t like them. They are “instant paint”. Just for the moment you spray them. They don’t last, they don’t shine, they’re so smooth, they spray all your clothes…Fuck them! Only the Belton Molotow and Dupli Platinium find props to me.

If you could choose a few cans to have on your shelf, what would they be?
Of course the Novemail, the De Keyn and the Bordens. Plus some old Hit colors, and… and… there’s too many!

Any other comments?
Keep digging! ‘Cause you meet great people with lot of stories and knowledge, and another can is another way of writing!