What do you write?
Big Tomb Rock

Tell us a little about yourself… How long you’ve been painting and who you’re down with etc.
I did my first piece in 1989 but I was scribbling for a few years before that. I was always facinated by the graff in my city, New Bedford, MA. Always had a big Spanish population with strong roots in NYC, so there was a lot of graff in the 80s, but in 89 I went to visit family in Philly and I was buggin’. Philly was destroyed! Anyway, I did my 1st piece down there and when I came back home it was on. I didn’t know any “real” writers but a couple neighborhood kids was down so we started toying shit up. About a year later a new kid showed up at school with crazy airbrushed jeans w/wildstyles and cheechwizard and shit. We started chillin’ and it turned out his brother was an old school king: Spy 2 (RIP). He schooled me to style, blackbooks, markers and just general graff knowledge. At the same time I was ditching school riding the trains all over Boston, walking lines and taking flix and occasionally I’d meet writers, but they were few and far between. 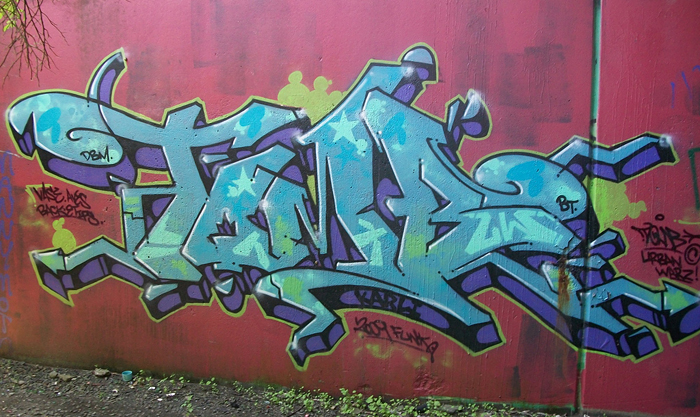 By 1993 I was a serious writer and I started writing Tomb. I hooked up with Wizart in Providence and started repping his crew DOA. In 1995 I started my own crew with a couple of the best writers from my city, 3DEE who was an old school king and ATSET who was my main partner. It was called DBM, Dollarz Being Made or Drugz Bitchez and Money. We felt graff was gettin’ too artsy and soft and we wanted to bring more of a “street edge” back. We was ready to make our mark in the game. My man 3DEE got murdered before we even really got started. It really fucked my head up and I started runnin’ the streets hard. I wasn’t too active for the rest of the decade but I was still drawing and paying attention to the walls. I was deep in the hustle game and started taking trips to the Bronx on the regular. I was mesmerized by all the graff and was buggin’ when I saw my old friend Wizart on mad productions with UW crew. When I got back home I started hitting some spots here and there and in 2000 I saw a flyer looking for graff writers. I contacted dudes and showed them my books & shit. They was feeling it and asked if I would paint live at a Hip-Hop festival that summer. I reunited what was left of DBM and rocked the show. The event was called ‘3rd Eye Open’ and 10 years later it’s still going as the biggest Hip-Hop festival/Graff Jam in New England. Since 2000 I never stopped painting and have traveled all over the East Coast to paint.

My crew DBM represents as one of the top crews in New England. I’ve also been honored to rep for UW and Bronx Team from NYC. Other crews I rep are NVS, BSB, Control from Boston, and I still rep DOA from RI. 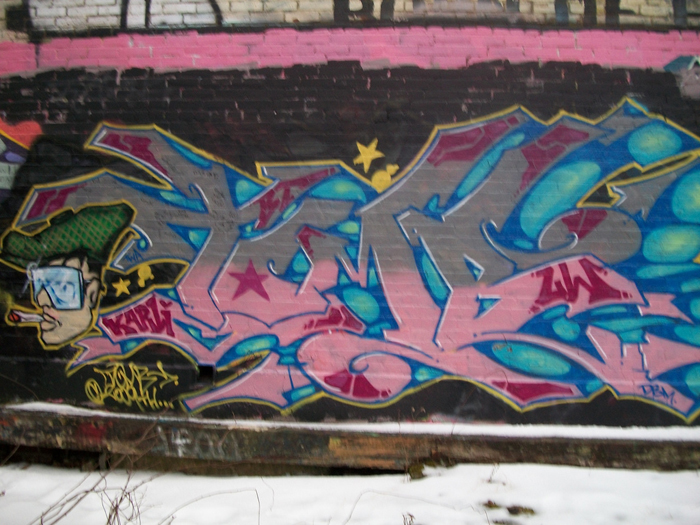 How would you describe your letter style?
I used to rock a real Boston no-negitive space type style,but I’m mostly known for my classic NYC type style.I would say I have a very NorthEastern style, my influences come from Boston, Providence, Philly and of course the Bronx.

So what brands of paint did you use most frequently in the early years?
Krylon and Rusto’ American Accents mostly.

Are you a can collector?
Not really I used to have alot of classic 90’s Krylon and AA but I lost a lot moving and I used a lot on walls thinking that I could find more.

Can you still find old paint stock in your area?
Yeah I still got a couple secret spots that aint quite burned out.

Any good racking stories?
Too many… One time I had like 15 AA cans in my army jacket with the bottom drawstring tied up, I was walking past the registers and cans started popping out the bottom, shit was mad embarrassing. I tried to play it off and keep walking but the manager snatched me up and was like; “I already called the cops, just give me the rest and you can go before they get here.” But yeah… me and my man Hustle, DBM were beasts, I’m talking mad carriages full. Hustle was just tellin’ me he still got stash from 5 years ago. 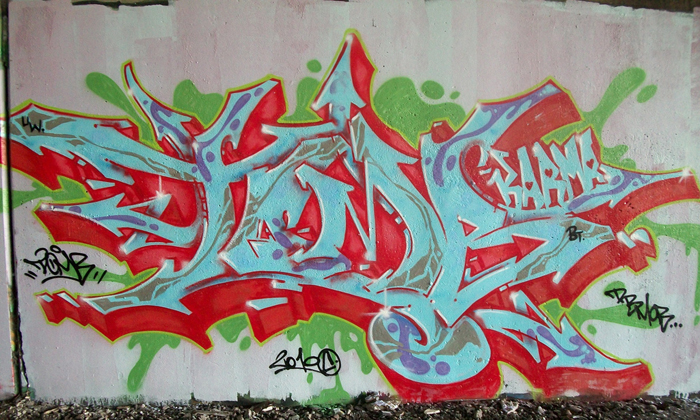 Best discontinued paint, and why?
I don’t know, did they discontinue the AA line? I cant find it near me anymore except for old stock but if it is, then that’s a shame because it was the best US paint. Dope ass color selection and good coverage, that’s all I really use for fr8s. That and str8 Rusto. I’d feel weird havin’ to paint fr8s with Euro paint.

Ever found some racked caps work good with certain paints?
Hell yeah that’s how we used to get our caps. Glass cleaners for NY fats, Elmer’s spray for Rusto fats, Testors and fixatives for NY thins… experimentation man, I found all kind of crazy caps in Autozone!

Worst paint ever award goes to?
New Krylon by fuckin’ far, that shit is fuckin’ piss….

What are some of your best painting experiences to date?
Any successful mission is dope but I love to paint in NYC esp. the BX and I love painting fr8’s and track sides. 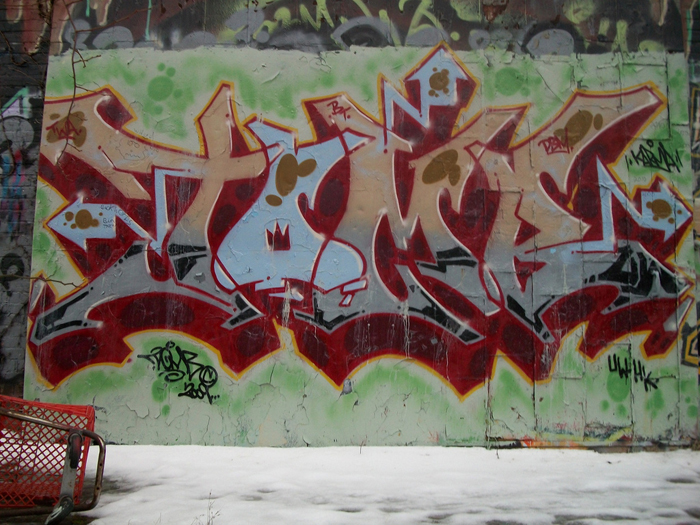 How do you feel about the brands of Euro paint and their impact on the scene?
They’re mostly all dope, it’s just like anything else, you gotta move with the times or get left back. Regardless of what anyone says that it’s cheating or whatever, but Euro paint ain’t gonna make a sucky writer good but it’ll make a good writer better. The game’s a lot different but you still gotta go out and paint, plus what it costs for a can of Rusto these days you might as well buy Euro.

If you could choose a few cans to have on your shelf, what would they be?
A couple Rust-Oleum ‘White’ and ‘Black’ pound cans, and some Rusto ‘Harbor Blue’ and Rusto AA ‘Summer Squash’

Any current/future projects?
I do a lot of commission mural work and I’m also involved with a lot of community murals, just really trying to advocate for the aerosol art side of graffiti. Also I recently started tattooing so I’m trying to master that art form as well, but yeah basically I’m just trying to earn a living off my art and support my family and still find time to keep droppin’ joints whenever I have free time, which ain’t as often as I like these days…

What do you think of CMC documenting paint history?
I think it’s a real dope tool for writers. Kids need to know their history… “You gotta know where you came from to get where you’re going.” Somebody said that before and it’s the truth… 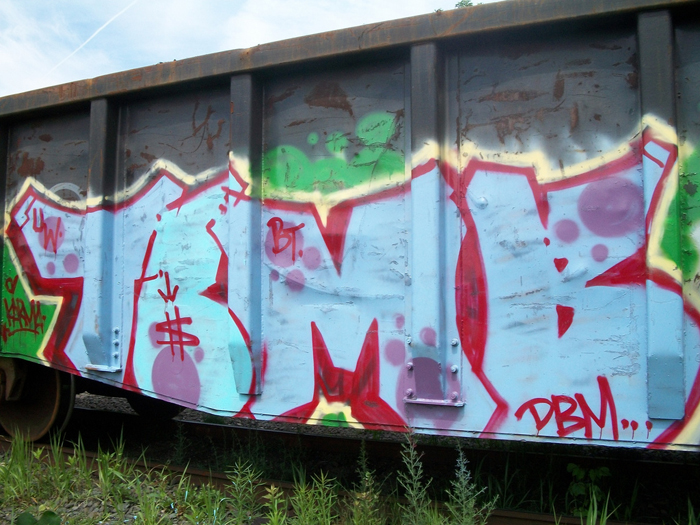