What do you write?
SB One 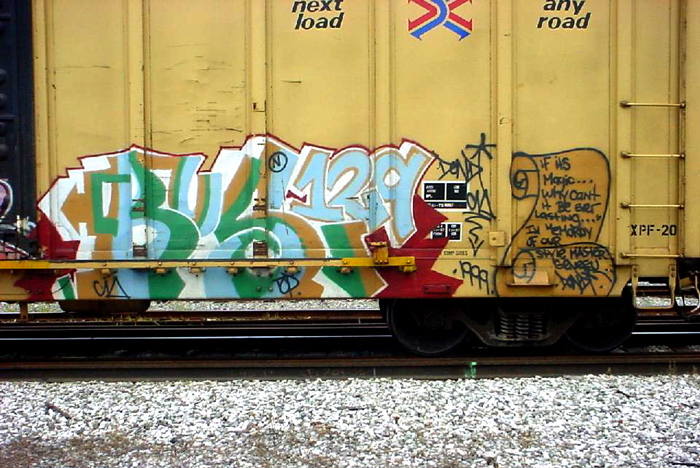 ^Bus 129 by SB1. Dedication to the late great style master general himself. Fill: Rust-Oleum American Accents, Indian Spice, Harbor Blue and Leafy Green. “I was always impressed with the way Dondi did those hard vertical color changes and the combos he used were so sick, I tried to emulate that approach here.”

Tell us a little about yourself… How long you’ve been painting and who you’re down with etc.
I did my first piece in 1986 so I’ve been painting since then. I’m down with NETWORK, UCA, FS, DOA, AMF, AK, DTK, ICR, CRE, MTK and KAOS.

Aside from Krylon & Rusto, what other brands of paint did you use during the early years in your painting career? (eg. Epoxy, Red Devil, Wet Look…)
The only other old paint I ever used was the old Red Devil. I remember scoring a bunch of them at this hardware store in Flatbush, Brooklyn.

What specifics do you remember most about these paints? Coverage? Color choices? Rarity in stores?
I dont even remember the specific colors. I had a light blue (maybe Delta Blue), Pink and Red… maybe more. I remember the coverage being sick tho, much like Rusto!

What do you think were some of the most sought after colors during the day within the more obscure brands?
When I started I was not heavily into painting and doing pieces. What little graffiti I did was on the insides with ink or around my neighborhood. So for a long time I was more of a tagger, I didn’t do a piece until 86. In those years, the idea of vintage paint hadn’t yet begun. I just remember everyone talking about Krylon, Icy Grape. That was the only color nobody could find. In the late 80s I was still very much a toy so I wasn’t really into obscure brands. All I really knew was Rusto, Red Devil and Krylon. Between those three brands I didn’t really think of using anything else. In the 90s I began using store brand silver. Home Depot had a cheap 99 cent silver that I used by the case when I started doing freights, then later Walmart had a 99 cent silver that I used often. But that was the extent of my use of off brand paint. I am totally loyal to the Rusto brand. 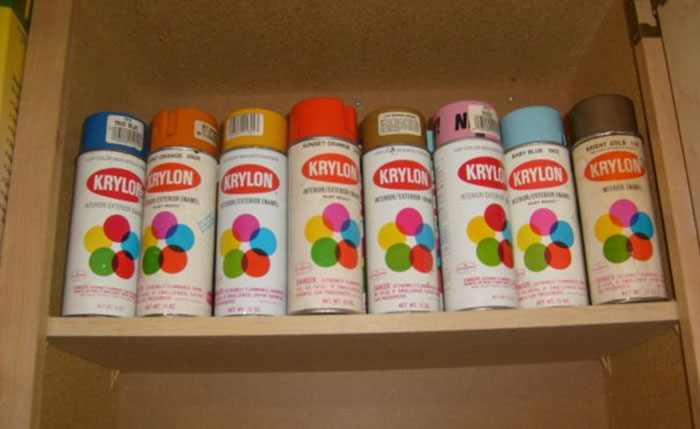 Did you have a preference over Krylon or Rust-Oleum?
Well, for what I like most which is bombing freight trains, RUSTO IS SUPREME!!! That aside, I think you first have to differentiate between walls and trains. On a nice white primed legal wall where you have time to work with lesser brands, just about anything works well. On steel however, Rusto is supreme. Krylon in the last 15 years has gotten progressively worse. Now they got this fan tip shit and the paint in the can is about as thick as baby piss. Even back in the day most Krylon was never as good as Rust-Oleum as far as thickness and coverage. Where Krylon wins however, is in the color selection. Then and now Krylon has a brilliant color selection. When going to paint steel, I only bring Rust-Oleum products with stock caps and orange centers, (rusto fats). Who has time to be filling on one letter 2 or 3 times with cheap paint? Plus, on freights, pieces can last for up to a decade or more and you’ll really want Rusto because that shit is durable and stands the test of time.

Any favorite vintage color combinations in your pieces?
My favorite color combo from an older piece has to be the piece I did in the scrap yards with Cav and Kirs in 88. 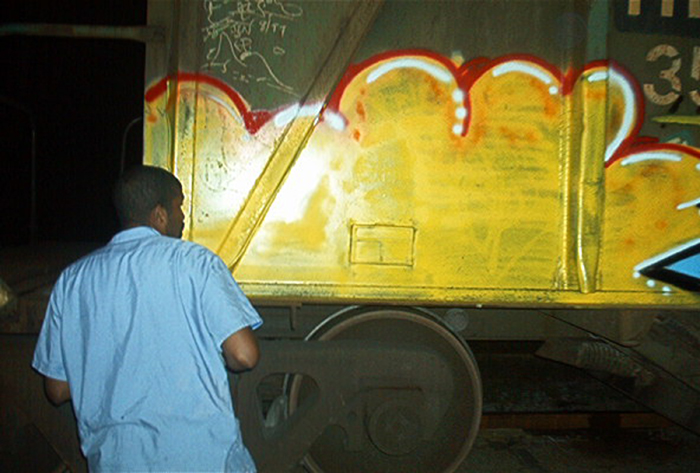 ^Busting out the Rust-Oleum, Sunburst Yellow cloud on an SB WON end-to-end. 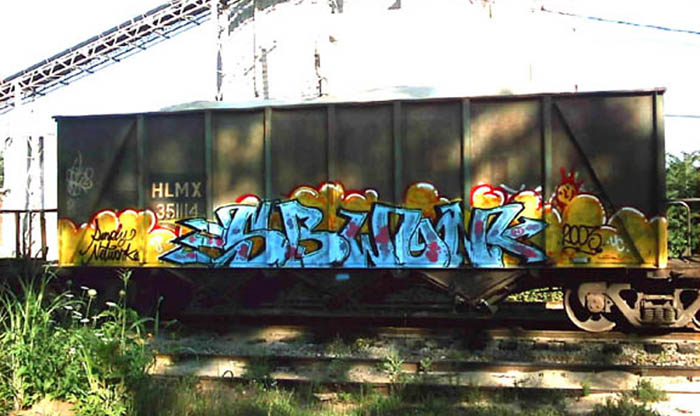 ^SB Won end-to-end, 2003. Fill: Rusto’ Harbor Blue. One of my favorite colors because it’s still readily available on the shelf and it only takes one coat. I have a few cases of the female cap version that I’ll be using sparingly for the next 10 years or so. Designs: Rusto’ Painter’s Touch, Berry Pink & Grape. Cloud: Sunburst Yellow. Highlights: Rusto’ Festival Green.

Any good racking stories you can share?
Not so much. I was never much of a racker. Everybody’s racked a few cans here and there, including myself, but I never did much serious racking, nothing to write home about. By the time I started painting heavily I had a car so I often drove to the ends of the earth so my boys could rack and share the spoils, gas was also 89 cents back then too…

Do you remember the paint stores that you’d visit back in the day? What were some of your favorites and why?
Back in the 80s the best spots for paint were mom and pop hardware stores in the neighborhood. Pearl at Canal had mad paint too! Seemed like they had the whole Krylon color chart in that place. I remember going to TSS on Metropolitan Ave in Queens with my folks once and they had a huge selection of paint. In the early 90s, the spots were Home Depot, Big Lots and K-Mart. I had a homeboy that used to rack 100.00 diamond tipped drill bits and then return them for store credit and buy all paint. They got hip to that shit after a few runs!

Do you still have any old cans saved?
I have 3 cans from my older days. A can of 86 Rusto’ Avocado, a can of 1992 Rusto’ Festival Green and a can of Rusto’ American Accents, Indian Spice. Sometimes I bring them out to use just a squirt here and there in my piece.

Best discontinued paint, and why?
Besides Rusto’ Scotties, I think the original generation of Rusto’ American Accents is the best discontinued paint. AAs when they first came out were like a breath of fresh air. Most of all the old Krylon that was still any good was getting harder and harder to find, so the AAs had the durability of traditional Rusto and now with the ill color selection meant we were ready to do business. I got a big score of it up in New England once and used it for years. Raspberry, Grape, Indian Spice, Marigold Yellow, Leafy Green – I could go on for days… The shit’s neo classic! 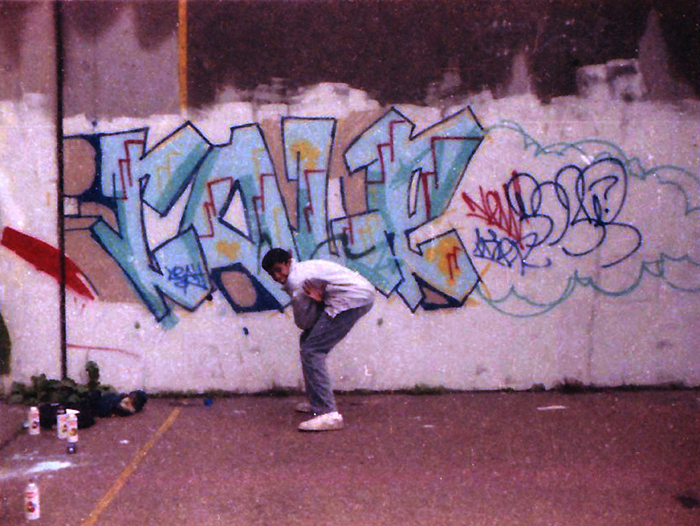 Did you or members of your crew ever try mixing your own colors? If so, what was your technique?
The only person I ever knew that knew how to mix paint was my man Munk, WCA. I never saw him do it but he had a can of mixed paint. It has something to do with one of them WD40 tubes, putting the cans in the freezer or something like that. It was also really messy. Im not a chemist so I didn’t understand when he explained it to me. Besides, I think the test of any writer is to make due with what you got.

What’s the worst paint you ever used? Brand? Color?
The worse paint I have ever used was Krylon, Plum and Popsicle Orange. I remember even back in the 80s they were both such a nice colors but such a let down because it was so thin.

How do you feel about the brands of specialized paints today? Do you miss the early days of experimentation with found caps & homemade techniques?
I enjoy using the specialized paint of today. Euro paint kicks ass for productions and legal walls. With the paint out today you don’t ever have to worry about finding a specific color. But again, for freight trains, nothing beats rusto. I have seen pieces done in Euro paint, on trains that have been running exposed to the elements for 5 or 6 years and there is a significant pigment loss in the color. So again, the real test for durability is how well it holds up on steel. And in my experience, euro paint is good for the first couple of years but does not hold up well to extreme sunlight and average wear and tear. I don’t really miss the days of racking caps although I was known for cleaning out entire supermarkets for their caps. I like NOT having to save used caps any more. Back in the 80s and 90s, I used to keep fat caps in a film canister with paint thinner to keep them from getting clogged because you never knew when you would be able to score more. Now you can buy caps by the pound so they are pretty much disposable. 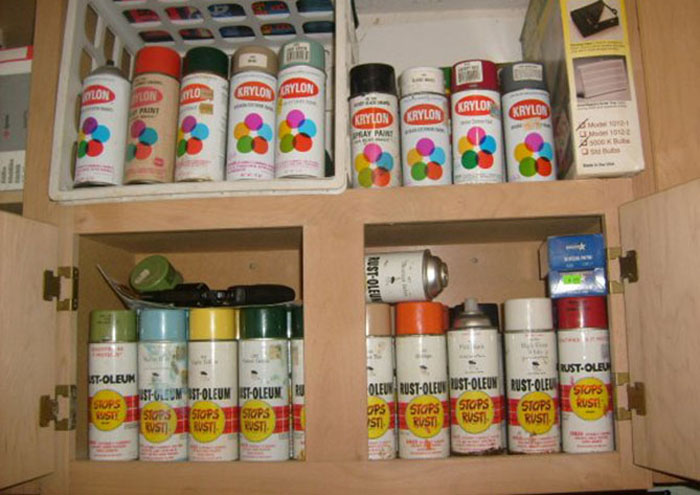 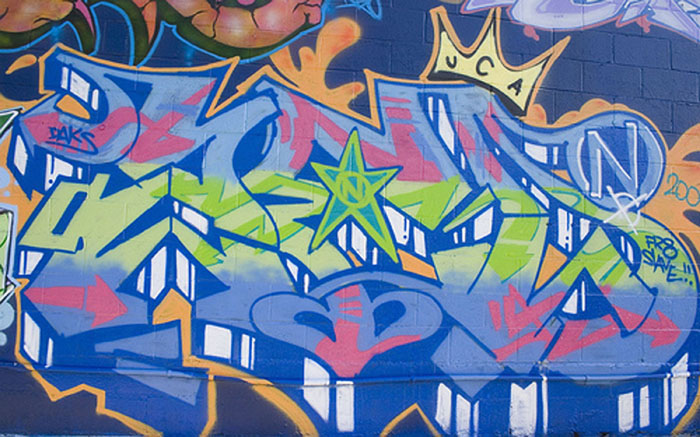 ^Zed by SB One

If you could choose a few cans to add to your shelf what would they be?
I would love to have a can of Krylon, Icy Grape mainly because when I started writing in 85 that color was already vintage. Ven had a can of it, and I only saw it once. I know it’s kind of lame but I would also like to have a can of Krylon, Clover Green. I used to use this color a lot because it was one of Krylon’s more durable colors from a time when they made better paint.

Tell us about the Steel Wheels project that you’re involved with…
Steel Wheels is an organization devoted to the celebration of graffiti on trains. I have been benching since 1985 and saw the NY subways die and the freight culture unfold. Steel Wheels began as a cut and paste magazine in the early 90s. We just completed a self published book called Steel Wheels 1986–1997 which covers the last few years of graffiti on the New York City subway and the first few years of graffiti on North American freights. The book is totally unbiased and from the perspective of someone benching. Recently we have been celebrating the rich history of American train graffiti with a series of Art Shows respectively titled, the Steel Wheels Show. We’ve had a total of 4 shows so far.

What’s in store for Steel Wheels in the future?
Well, I’m seriously contemplating putting out another book because I still have quite a few fliks that I did not put in the first book. I’d also like to do a book on throw ups and hand styles from the 80s and 90s, but those are just ideas right now. We are planning the 5th Steel Wheels show for later in the year.

What do you think about CMC documenting the history of spray paint?
Totally nerding out on spray paint is an aspect of our culture that has not been taken seriously until the last 10 years or so. After all where would we be without spray paint. It’s good that it’s being done correctly by CMC. I only wish I would have saved some of the old paint I had from back in the 80s.

Any comments/Shouts?
I wanna give a shout out to all the writers out there doing their thang and to all the crews I represent. But most of all I wanna say peace to all the writers who have passed away; Oiler, Sire 365, Nace, Dondi, Atem, Rem311, OhNo, the great IZ The Wiz, Heist, Beno, Sane, Tie, GB One and to the all the writers that are gone but not forgotten. 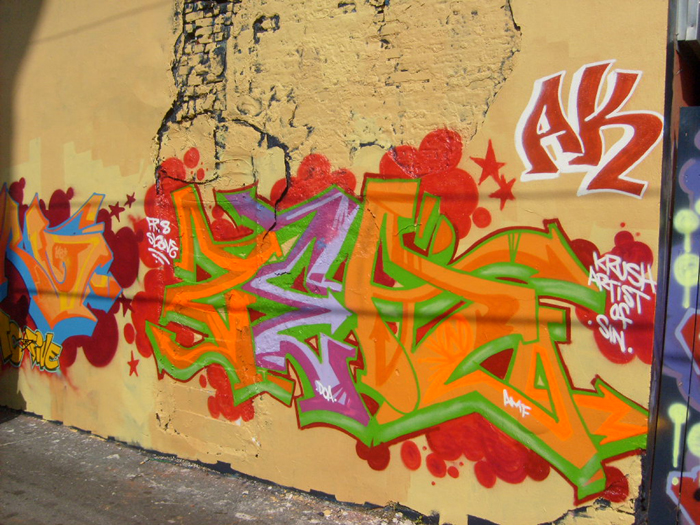 ^Zed by SB One